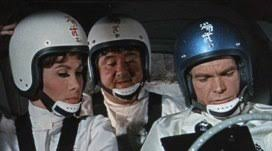 “C’mon, Ted: a Volkswagen with a mind of its own. That’s pretty scary.” So says Father Dougal McGuire in the celebrated sit com Father Ted. It’s not scary, Ted points out. Herbie is a kid’s film and one of the most successful and beloved that Disney has produced.  Herbie is a 1963 production model Volkswagen Beetle who does indeed come to life and get into a series of adventures with his drivers and passengers. Along with KITT and the Batmobile, Herbie is a Star in his own right and instantly recognisable. These cars have a personality of their and should definitely be kept under a Bespoke Oak Carport like the ones you can find at bespoaktimberframes.co.uk/ 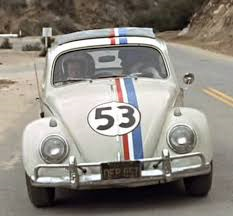 Herbie is found forgotten and forlorn in a car show room having been returned for reliability problems. Jim Douglas is a down on his luck racing driver desperate for a car, any car, which can propel him into the big time racing again. He decides that Herbie is the car after it is harangued by the villainous owner Mr Thorndyke. Taking Herbie back to his garage he introduces the car to Tennessee Steinmetz his mechanic who starts making friends with Herbie by naming him and starting to believe that there is more to the Beetle than meets the eye.  As Herbie begins to win Jim races, all the time being coached by Tennessee, he is watched by Thorndyke. He comes to believe that Herbie is alive and wants to buy him back, especially after the Bugs impressive turn of speed far beyond what it should be capable of. Douglas refuses and in a fit of pique lambasts Tennessee and Carole, Jim’s girlfriend and says that the new Lamborghini he has bought will help him win even more races. Jim is hurt that his friends see the wins as Herbies achievements and not his.

Herbie drives off into the night just avoiding a demolition team sent by Thorndyke. He smashes through Chinatown in San Francisco and attempts to throw himself off the Golden Gate Bridge. Jim saves him only to need saving himself and the police arrive and impound them. They are visited by Mr Wu a business owner whose shop has been damaged by Herbie. Thinking quickly and using Tennessee’s knowledge of Mandarin, Jim persuades the racing mad Mr Wu to buy Herbie and let him race. Mr Wu gets to keep the huge prize money and Jim will buy Herbie back for one dollar after the race. Mr Wu enthusiastically agrees and the final show down is set against the evil cheating Thorndyke.