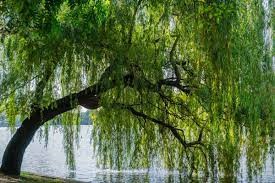 These fires, especially the ones that were lit at Beltane (Mayday) and Samhain (Halloween) included the nine sacred woods for the fires – woods from nine native trees that each have their own unique powers which can be utilised when burned. Here are the nine sacred woods that are traditionally used in a sacred fire… 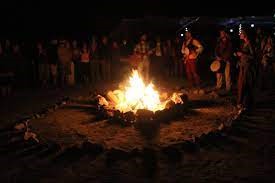 Birch – This tree is known as the lady of the woods and as the first to reappear after the ice age is known as a pioneer species. Associated with change and new beginnings, as well as renewal and cleansing, the Birch tree has a special place in our hearts. The Silver Birch is a garden favourite, and its beautiful silvery bark stands out even in the winter.

Ash -The beautiful Ash tree was particularly revered in Norse mythology as it was said to be the tree of life – Yggdrasil. The ash tree is associated with knowledge and sadly the ash trees of Britain are now facing danger due to the ash dieback disease.

Alder – The hardy Alder tree is found near water and is able to grow where many other trees are not. It is also able to make the surrounding soil more fertile. It represents prophecy and looking to the future.

Rowan – The beautiful Rowan tree is also known as the mountain ash. Although it is not related to the ash tree its pinnate leaves are a similar shape to those of the ash, so it is clear why the two are linked in name. Rowan trees are believed to have strong protective powers, as well as being associated with success.

Oak – The iconic tree of Britain, the Oak tree has long been favoured by ancient people who would gather beneath it in ceremony, and couples would often marry beneath the oak. These trees represent strength, and the wood that has been used for thousands of years for building is still used today for things like these oak garages https://www.timberpride.co.uk/oak-framed-garages

Hawthorn – Also known as the May tree due to the blossom that blooms on the tree during this month, the hawthorn is strongly linked to the faery folk, and it is also a tree which represents fertility as well as being a natural defence – many of the hedgerows in the countryside are hawthorn as the strong spikes make an excellent barrier.

Willow – The beautiful willow tree is a favourite for weaving and wicker. It is associated with the moon and femininity as well as water and emotions. It is said to help with sleep problems and soothe bad dreams.

Holly – The festive favourite, the evergreen holly is instantly recognisable and as well as the sharp thorns the wood was also carried as a protective staff or talisman, said to repel bad spirits and negative energies.

Hazel – The tree of wisdom, there are many legends regarding the knowledge of the hazel tree. It is also the most commonly used wood in dowsing, the art of finding water underground, and hazel wood is also used for weaving and basket making.