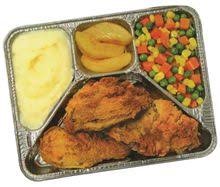 The TV Dinner or microwave meal was launched as the answer to a quick simple and nutritious meal when you really could not be bothered to cook anything. Picture the scene. You’ve had a hard day’s work and you really fancy a roast dinner or sausage and mash or a curry. You only get 3 Channels on the TV so you’ve no worries about what to watch (probably just soap operas) but you’re not in the mood to prepare the veg, make the sauce, roast the meat etc. By the time you’ve done that it’ll time for the nine o’clock news and then some boring political programs on the Governments attitude to the Suez crisis or something. At least you know that a TV Aerial Installation Swansea based company like https://www.onevisionltd.co.uk/tv-aerial-installation-swansea/ can sort out any reception issues for you.

So what’s the answer? Well it came to the general public in the form of the “TV Brand Frozen Dinner”. It was launched in the USA first as a frozen alternative that you kept in the freezer ready for such an emergency as the can’t be bothered scenario. It was viewed with suspicion at first as it seemed to be undermining the role of the housewife. The popular view in the 50’s was the “little housewife” taking the kids to school and picking them spending the rest of the day shopping and making sure the house was immaculate for the return of the Husband after a day’s work.   If all they had to do was stick a meal in the oven what was there motivation in life, yes they really did think women were only suitable for that role back then even after women had spent the last 4 years working in arms factories, on the land producing food and generally filling in doing all the roles that men left behind went they went to fight in the second world war. 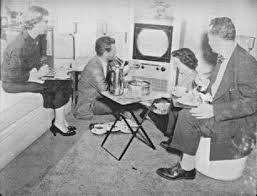 The advertisers soon saw a way around this. They started to sell the TV Dinner as a backstop for when the charming but ultimately annoying Husband suddenly announced, out of the blue that he had ben playing Golf with Roger after work and he said (not asked) that he could come back for dinner. The dinner was the saving grace and got he housewife out of a jam.

We now know that the TV, microwave dinners are ultra-processed and have extremely high levels of fat and salt to keep them preserved along with the frozen process. To be used sparingly then and not relied on for regular meals.