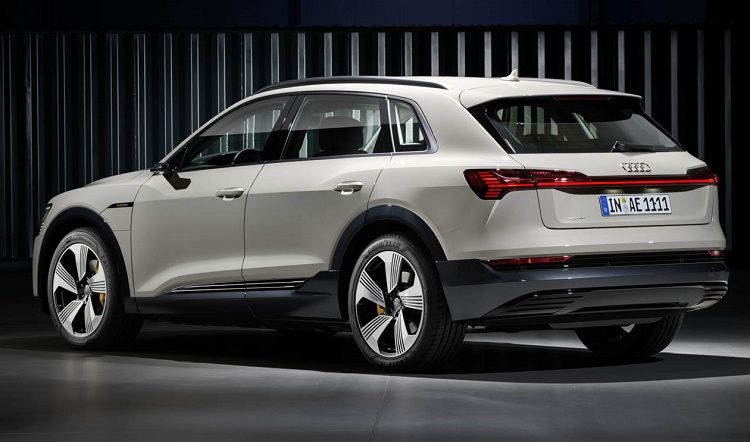 The competitors of audi e-tron crossover are Mercedes-Benz EQC, Tesla X and Jaguar I-PACE will go on sale already this year. The company Audi, following Mercedes-Benz, is trying to lead the market of electric crossovers, where now there are only two brands: Tesla and Jaguar. Audi looked at the competitors and decided to focus on the range of travel on one charge. It turned out quite boring, but this is how a mass electric car should be.

The main thing of the Audi e-tron crossover 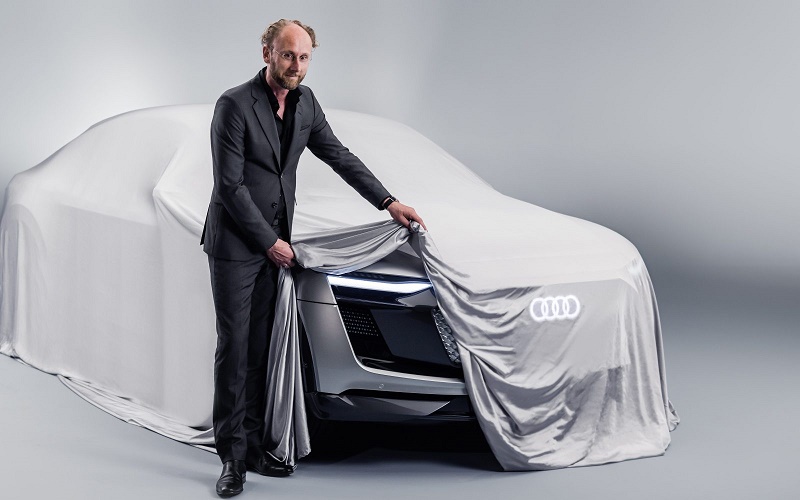 One of the main features of the car is an advanced energy recovery system. It replenishes up to 30% of the power reserve, returning to the batteries energy up to 220 kW. The steering column switch controls the level of recovery. When you turn on the most “hard” version of the car will be hard to slow down when the driver takes his foot off the gas pedal. That is, you can control the Audi e-Tron with only one pedal. In this case, the braking will not be “too electric,” as, for example, in the Jaguar I-PACE. It’s all about limiting the overload. If the unit has a top bar at 0.4 g, then Audi has a lower 0.3 g.

It is possible to use both conventional brakes and mix different deceleration options. The driver will also be able to disable this feature.

The chip, of course, is interesting, but I think customers should immediately decide what to choose: turn on the energy recovery system, turn it off or set something in between. The fact is that if the driver gets used to it, but decides to turn it off or change to another car, it can simply forget about the brake pedal. An annoying mistake, risking to become for the owner fatal. Interestingly, Audi thought about this? 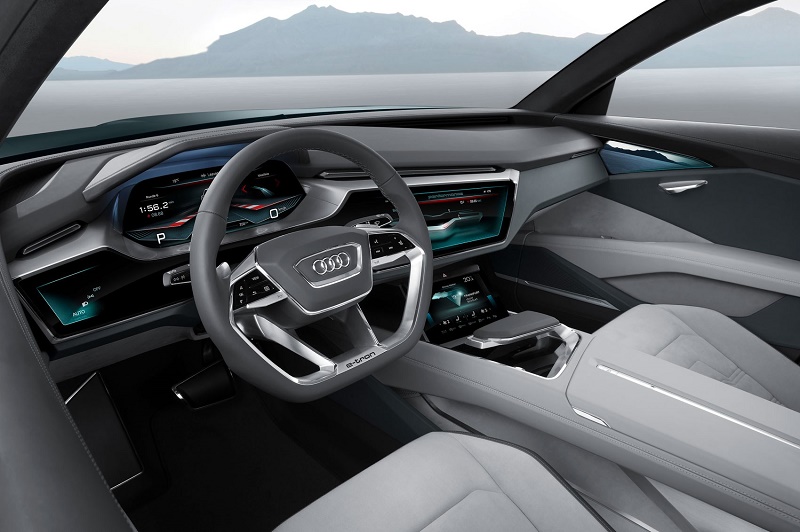 Externally, the car is very similar to Audi’s crossovers. At the same time, the company separates the e-Tron from other cars of the Q family: the electric-crossover is greater than Q5 and less than Q7. In length and width (4902 × 1938 mm) it is closer to the largest SUV Audi, but in height (1664 mm) – suddenly to the Audi A6 Allroad. And this is not the last time I remember the “six.”

The electric car stands out among the other crossovers with the updated optics: the e-Tron has something like a “shooter” on the headlights.

The presented car is still a prototype. For example, cameras instead of mirrors, if they appear in the series, will be available only in Japan, the only country where they are allowed. It is necessary to recognize that it looks spectacular, but it is still unclear how they will behave at night.

In general, the car looks much more “bold” than its counterparts in the brand: neither Q7 nor Q5 has such “inflated” wings that pass through the doors. And this is the right decision: Audi’s rather boring design is somehow animated.

At the same time, the angular style of modern brand cars damaged the electric car: the coefficient of aerodynamic resistance in e-Tron is significant 0.28! Although this indicator is commensurate with the claimed Mercedes-Benz EQC “less than 0.30”, but more than 0.24 recognized leader of the segment Tesla Model X. 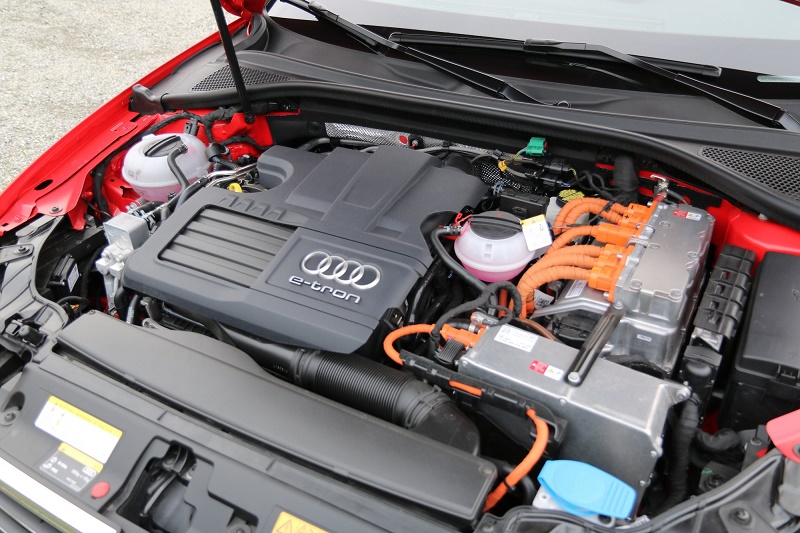 Audi e-Tron received just two asynchronous three-phase electric motors. Their total maximum power is 300 kW (equivalent to 408 hp) with 660 Nm of torque. But all this will please the driver only eight seconds – such limitations of the over boost mode. In actual conditions, the car will be slightly calmer: 265 kW (equivalent to 360 hp) and 561 Nm. But even here the maximum power is limited in time: just a minute. Are you dispersed? Dying – you need to cool the engine.

In this, there is a rational grain. Audi says that the e-Tron in real life on a single battery charge of 95 kW can drive up to 400 km. And it was for this purpose that the maximum speed limit was set at 200 km / h. And up to a hundred times it accelerates for “long” (not at all) 5.8 seconds. And why the crossover be faster? And when you reach the average speed, only one engine works.

Someone will say that this is boring, but I believe that this should be an electric car: in real life, high speeds are not needed, as neither is the all-wheel drive and wild power. But the battery charge, which is enough for a long journey – the most important.

The charging port is located directly above the front wheel

The e-Tron batteries can be charged from the units by 11 and 150 kW. In the first case, the full charge will take 8.5 hours. And when using powerful public charging stations for 30 minutes, you can recharge your batteries by 80%. Transfer such technologies to the new iPhone. 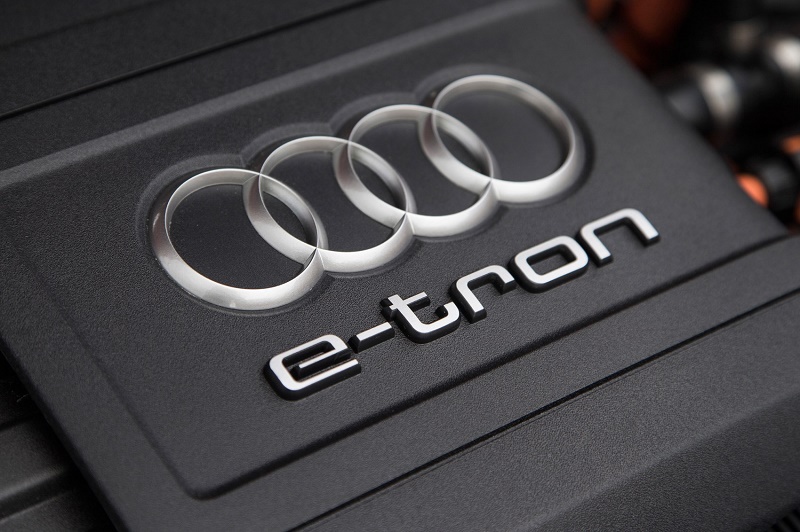 The minimum equipment in the US will cost $ 74.8 thousand. The Prestige version with massage seats and an enlarged central display will cost about $ 82,000. The most expensive bundle of First Edition will cost $ 86.7 thousand. The first buyers will receive an electric car in the middle of 2019.

Audi positions the e-Tron as an ordinary crossover: you can easily change from a gasoline car to it. There is not too “electrical” controllability, acceleration and braking. All in the range to which we are accustomed for decades of the realm of cars on the ICE. And this is seen as a very competent approach: yes, customers need radically new things. But they should not scare.

How to protect your mobile phone screen from accidental damage

Looking after your garden in winter

Six types of knitwear and how to wear them

Great reasons to consider plumbing as a career

The different ways that an accountant can help you

Flooring options for your garage

How to protect your mobile phone screen from accidental damage